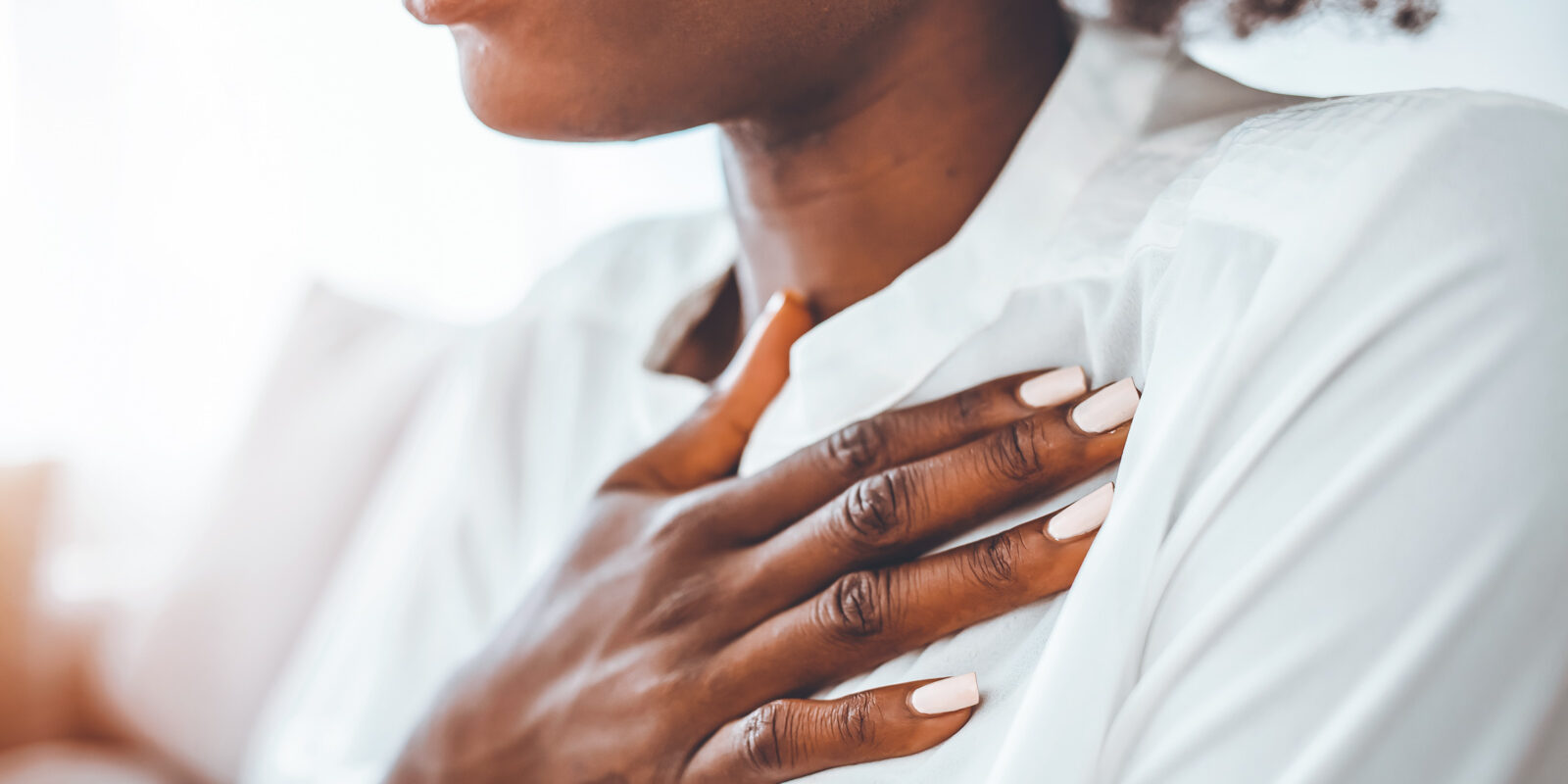 Postural Orthostatic Tachycardia Syndrome (POTS) is a rare form of dysautonomia. Characterised by exaggerations in things like heart rate, blood pressure or sweating or body temperature when standing, the condition is thought to affect less around one in 3 million people. While presentations differ from person to person, and research is yet to fully understand the aetiology of the condition, we do know it is more common in women and it is more likely to develop in young adulthood and teenage years than in older life.

Other symptoms can include things like severe fatigue, brain fog, headaches, nausea and intolerance of exercise among many others, and as you can imagine, the condition can have wide ranging effects on a person’s qualify of life. While some authorities are still debating the classification and validity of the condition, there seem to be four subtypes – neuropathic hyperadrenergic, hypervolemic and secondary (the latter of which occurs when there is another autonomic condition such as an autoimmune disorder present).

It is complicated! And thus it can be complicated to treat, with no known cure on the table as yet. That’s what makes a recent case report and review of the literature so interesting. Not only does it go to great detail to discuss the details of the case, but it discusses why this is important for chiropractic and what the mechanisms might be.

A 36-year-old stay-at-home mum presented for care with constant headaches, dizziness, nausea, and palpitations after fast head movements. Her symptoms began after falling on ice and sustaining a moderate to severe concussion. The impact of the fall was to both the craniocervical junction and the left sacroiliac joint. She described feeling immediate confusion, dizziness, nausea, headaches on both sides of the head, palpitations, and transient amnesia.

She was diagnosed with having suffered a moderate to severe concussion, and after a few weeks, up until the time she presented for care, she was still experiencing many of these symptoms. She found that fast head movements or any postural change to or from the upright position prompted some of these symptoms, and that symptoms worsened with alcohol consumption and fatigue. Other complaints she reported were exercise intolerance, bloating, fatigue, constant neck pain, as well as pain in the left sacroiliac joint and left sciatic pain that extended down to her foot. Although she was able to keep up with the activities of her daily life, it was made difficult because of the pain (with young kids, you could imagine!). After little improvement in her symptoms over one year she decided to seek treatment.

Her past medical history, aside from the fall, was unremarkable. She experienced an episode of neck pain after a mild head trauma 10 years previous, but the complaint was resolved after seeking low force upper cervical chiropractic care. She had been under the care of her medical practitioner for approximately 4 months prior to presenting for chiropractic care, with analgesics for her pain being the predominant recommendation. She had been offered no treatment for her symptoms of exercise intolerance, bloating, fatigue, or any of the other symptoms.

The chiropractor completed a thorough patient history and comprehensive physical examination, including orthostatic sign testing, and determined that the patient met all the criteria necessary for a diagnosis of POTS. During the chiropractic examination the following was identified:

The patient was negative for benign paroxysmal positional vertigo, assessed using the Dix-Hallpike manoeuvre, but it did trigger strong dizziness and palpitations lasting over 30 minutes after the completion of the test.

Care was aimed at supporting and improving the autonomic nervous system function of the patient. Specifically, co-occurring symptoms were addressed by correcting the associated craniocervical junction, spinal, and pelvic misalignments. Additional therapies, such as lifestyle and diet changes were also recommended. The authors divided treatment into 3 stages to best evaluate how the patient responded to each intervention.

Stage one: AO and SOT chiropractic care for 2 months.

The patient was re-evaluated with an active 10-minute stand test after every stage and neurological examinations were completed before and after stage 3 to reassess brainstem function. Misalignment at the CCJ was corrected using a low force AO percussion instrument, according to the x-ray findings, with post-treatment cervical x-rays confirming the proper spinal alignment was restored. SOT category 3 procedures were performed to address the sciatic pain symptoms and positive ‘step out toe out’ test results. Chiropractic manipulative reflex technique was alternatively provided for the T9-associated adrenal gland and the L1-associated ileocecal valve. Cranial sutural motion was restored by releasing the unilateral movement restriction of the zygomatic bone and TMJ using SOT intraoral and external pterygoid muscle release interventions.

At the end of stage one the patient no longer experienced the headaches, neck pain, left sacroiliac/sciatic pain, or restricted cervical/lumbar range of motion. Orthostatic symptoms after changing position (laying down to standing or standing to laying) had improved by 50%. The patient reported feeling less fatigue and improved tolerance to low intensity cardiovascular exercises, but still reported bloating.

At the end of stage two there was a further improvement in the stand test results, and it was confirmed the patient was no longer meeting the criteria for POTS. Orthostatic symptoms of dizziness and nausea were reduced by 75% compared to the initial stand test results and the patient reported performing low intensity exercise without difficulty. There was minimal fatigue reported and no more bloating. As some dizziness and nausea did remain following the 10-minutes stand test and head rotations, the daily home-based postural challenge exercises with ocular fixation were added. The neurological re-evaluation showed most of the significant findings of the initial examination had normalised, with the exception of hypermetric downward left diagonal saccadic eye movements.

At the end of stage three the final stand test remained negative for POTS and the patient reported only mild dizziness, with no nausea or palpitations, while completing the test. The final neurological test was also unremarkable, aside from mild hypermetria persisting upon the downward left diagonal saccadic eye movements. It is worth noting that a differential diagnosis of orthostatic hypotension was ruled out, along with benign paroxysmal positional vertigo, as there was no significant blood pressure decrease observed during any of the 10-mine stand tests completed throughout the care period.

The why behind the what

They also referenced other studies that report altered cardiac autonomic function can be observed in patients with headaches, migraines, or neck pain. The current study suggests that this correlation may be the result of trauma to the head inducing CCJ misalignment.

The authors proposed that impaired CSF flow may be contributing to the symptoms observed, as well as disrupted blood flow through the vertebral artery and suggested the mechanism underpinning these impairments may be C1-2 misalignment due to the mechanical strain suffered during head trauma. The misalignment may also lead to changes in the dura mater which has attachments to the foramen magnum, C1-2, pelvis, and various other attachments to the vertebral column and sacrum. Altered Dural tension at one section of the spine can affect other sections, compounding CSF flow impairment, which may in turn reduce oxygen delivery to areas of the brain. The authors cited studies suggesting chronic reduction in oxygenation to the cerebral tissue, including the brainstem, and altered Dural tension is associated with nociception in the head and neck, as well as reduced ANS function.

The SOT protocol likely resolved the sacroiliac/sciatic pain symptoms and normalised the Dural tension that may have been contributing to the craniocervical junction instability. The CCJ is involved in facilitating the reflexes responsible for keeping the eyes levelled and the head vertical over the centre of gravity. Thus, incorrect alignment of that region may lead to compensatory spinal or pelvic misalignments (potentially further contributing to the altered Dural attachments/tension).

The authors sought to incorporate multiple non-invasive interventions, such as dietary change, to support healthy gut function. The health of the gut may seem unrelated to the health of the brain, but inflammatory conditions such as leaky gut have been shown to disrupt the blood brain barrier. When this barrier is compromised, it is less effective at restricting the passage of elements, such as toxins and pathogens, from the blood to the brain. As the patient also reported ongoing gastrointestinal complaints, the treating chiropractors implemented a gluten-free diet to potentially reduce inflammation. Vitamin supplementation was also implemented as an inflamed gut has reduced absorption capacity and vitamins can have neuroprotective properties.

To support the use of postural challenge exercises, the authors cited previous studies suggesting habituation can be used to rebalance the vestibular system. Habituation refers to a learned decrease in response to a stimulus achieved through repeated exposure. As was evident through the final examinations, there was an improved tolerance to orthostatic stress, potentially indicating successful habituation.

While there is undoubtedly further research required into this complex condition, this case report provides a little hope for POTS sufferers that chiropractic care may indeed be worth a try when it comes to restoring the function of a nervous system that is struggling to regulate itself. And after all, isn’t caring for nervous systems what chiropractors do best?