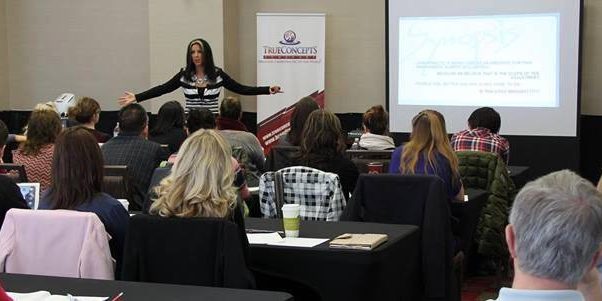 “When I get sick, I’ll go to the doctor. When I have a bad back, I’ll head to the chiropractor.” How many times have you heard it said?

This ill-fitting cliché around what a chiropractor does is something we battle when taking our message and the power of our adjustment to the world. We aren’t about ‘cracking’ backs. We’re about empowering wellness, changing the structure and function of the brain, and enabling the body to heal itself. We know that. Unfortunately, it can seem like the world is stuck in a sickness-centred paradigm and doesn’t quite ‘get’ us.

We offer so much more than pain relief, but how do we communicate beyond pain?

This is a question leadership trainer and chiropractic mentor Brandi McDonald has spent a lot of time immersed in. To Brandi, a major part of the conundrum is about who’s leading the dialogue. “Most chiropractors don’t know how to lead the conversation so the public is leading it, and the conversation they are leading is around pain. So what we’ve done is we’ve stopped there.

“We’re really good at fixing pain or being an analgesic for pain, but what we haven’t told the patient is that we haven’t treated their pain at all. What we’ve done was restored normal physiology to the body by removing interference to the master computer that runs the human body – the brain and central nervous system. Because we did that, then their symptoms went away.“

Having founded True Concepts Seminars and Epic CA, the latter being an online training program for CA’s, Brandi spends a lot of time training her own CA’s or hitting the speaking circuit to help others become a louder, stronger voice for chiropractic. It’s a cause she’s passionate about, but never intended to work in. “I was never going into practice. My background was in leadership.” But after her chiropractor husband Don MacDonald convinced her to join him in practice and work with their CA team, she never looked back.

This background in executive leadership, paired with passion and first hand experience in the power of chiropractic, now drives her. But in training CA’s to effectively communicate chiropractic, the first stop is with the leadership. “Most of my work is with the chiropractor, before I even get to the CA,” she says.

For the chiropractic profession, one of the challenges is to be relevant to the patient. When a new person calls into an office, or we see someone in the public, or we do a spinal screening, we often don’t know what questions to ask them so we just ask about where they are at. The mindset they are in then comes across. This starts to happen: the patient thinks, “I’m in pain. I have symptoms or problems. When that happens, I’m sick. I come to see you and you fix me. My symptoms go away. When that happens, I’m better” and the chiropractor struggles to find ways to explain why this isn’t necessarily the best model of health for them.

“It’s not about the right information, it’s about the right questions. We have to ask questions like this: “Would it make sense to you that you had dysfunction before the symptoms showed up?” People then start to think for themselves.”

According to Brandi, this is where the lights can come on and we can start to change the dialogue. As soon as someone says “I never thought of it that way,” or “I never considered that I could have had a problem before the symptoms showed up,” we know we are on the right track. It’s about asking questions in a way that makes the person arrive at the answers on their own.

But there is a caution in this: just because a new practice member is starting to understand just how dysfunction can exist way before pain, doesn’t mean we can then overload them with information. “As chiropractors we are super passionate about what we do, but because of this passion we can often just vomit information at them. They can’t hear what we are saying because they are just thinking “I have this problem. Can’t you just fix the problem? I don’t know why you are loading all this other information on me.” I like to call it drip-feeding information, in the form of questions that make people think “I didn’t think of it that way.”

Communicating beyond pain starts with chiropractors themselves, but goes to every level of the practice – CA’s play such an integral role in getting the message out to the world. “This is not a complex model. For us, this is the value of our staff. This is the value of me not being a chiropractor. It is really simplicity on the far side of complexity,” says Brandi. “You have nerves. You have a brain. You have vertebra. You have a spinal cord. It makes sense that interference with that distorts the system that keeps you alive. That makes sense to people.

This is why Brandi views CA’s as much, much more than receptionists, administrators, organisers or the welcome team. “My opinion on this is that all of that is secondary,” says Brandi. “They are educators first.  When you know that, in chiropractic, we are changing people’s belief systems not just their behaviours, it changes the way you answer the phone. It changes how you greet somebody. It changes how you process them. You can get a good customer service person anywhere. But a CA is just so much more than that. They are educators as-well. But in order for them to be that, we have to educate them.”

This is something Brandi and Don invest heavily into. To them, a new CA is just like a new patient. They go through all the processes a new patient would go through. They have the first visit, the report of findings, the health talk. They then build training and development into each bi-weekly and monthly staff meeting. There is goal setting. There is professional development. They go through the Epic CA training program, and once a year they go to a big seminar as an incentive.

“We are pretty intense about training for our staff” says Brandi. But the results seem to be empowering, with several of her CA’s going on to study chiropractic. “They don’t have to stay with me forever. I don’t have a staff turnover problem. But it doesn’t matter whether they are with me for three months or thirty-five years. I want them to be different by the time they leave – understanding health better, understanding their lives better.”

Empowering Patients with Information to Back Their Testimonial Is Intergal

Moving communication out beyond the practice can be a challenging area in terms of chiropractic communication. Oftentimes, we invest as much as we can into communication but still find ourselves at the mercy of sceptics and even the odd social media troll.

To Brandi, patients can be part of this if they have two things: consistency and tools. “If we aren’t using the right language, then they don’t have the right language. They start saying things like ‘getting cracked’ instead of ‘getting checked.’ But they also need tools. When they leave your office they need to be able to show people things. They need to have packets of information. This is where neuro-tests or x-rays can help patients present chiropractic in a credible way. They need tools. This helps them communicate what’s going on with them. The one thing you can never take away from a person is their testimonial. You can help them present it though.”

“I don’t believe this will change our market-share en masse. It will make a difference but we need a different approach. I’ll never forget this Ted Talk I watched called ‘Spaghetti Sauce and Happiness.’ In the 1970’s, a study found that 1/3 of the American said they loved chunky Spaghetti sauce, even though it wasn’t even on the market. They wanted it, but it had never been presented to them.

“Not everyone is going to want that. But a huge percentage of the billions of people walking around on the planet will want it.”