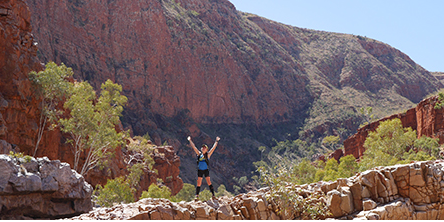 Dr Rob is a guy with a vision to bring together two things he loves – chiropractic and endurance sports – to “show his support for the important work the Foundation does”. We’re so excited to follow his journey and watch him participate in an amazing 4 day ultramarathon event in the Northern Territory. The Run Larapinta Stage Race is a race through some of the most beautiful scenery that Australia has to offer.

Rob began training for triathlons at the age of 13 in his home town of Corner Brook, Newfoundland in Canada, and it quickly became his passion. By age 16 however, the heavy training took a toll and he suffered a severe mid thoracic injury. After suffering debilitating pain for over 6 months and with the traditional options not working, he visited the first chiropractor who opened a clinic in his small town.

Initially unimpressed with chiropractic, he quickly realised the benefits, and after a short time was able to resume training. He went on to become a member of the Canadian National Triathlon team in the junior age group and later the 20-24 age group. It was the experience of having chiropractic getting him back to his passion that led to his decision to become a chiropractor. He continues to run triathlons and has plans to swim the Strait of Gibraltar in April 2017 and run across the Atacama desert in Chile in a 6 day ultramarathon race in October 2017.

In the past, Rob completed a 20km swim as a fundraiser for the Australian Spinal Research Foundation, and he has now decided to again combine his love of endurance sports with chiropractic, and run an ultramarathon as a further show of support for the important work that the Foundation does.

In August 2016, Rob will be competing in the 4-day Larapinta ultramarathon trail race in the Northern Territory and he is looking for community support for the run, to raise money for the Spinal Research. All contributions, big or small, will really help, as will sharing the campaign with others. Thank you!